Now we’re talking! In 2012 Elliott Perez stole 111 firearms from a Smith & Wesson shipment and his sentence for the crime is 17 years. Far too often we have a slap on the wrist for crimes such as this, take Dontray Mills for example or more recently where a UPS employee was stealing firearms from packages and his bail was only set at $25K. We need to be tough on firearm crime and the first thing to do would be to aggressively prosecute the criminals!

For more on the Elliott Perez story check out Guns.com.

Last year I started my subscription to The Bourbon Review and while I like the look and feel of the magazine, I wish it were a skinch more timely. I think we all know it is mostly glossy ads and puff pieces, but when something is coming out in September and the issue arrives at the end of October it is really not news anymore. Maybe I need to check their website more often, I do follow them on Facebook. Anyway if TBR is out there listening, get the me issue before the Bourbon is released. Thanks in advance! 😉

Yesterday I posted my excitement about the upcoming premier or Ash Vs Evil Dead. By the time I got home yesterday Starz had announced the show has already been renewed for a second season despite the premier not happening until Saturday night. I was reviewing some stats recently and found in NC we have over 20,000 accidents per year and an average of 5 people die in NC each year due to … drumroll … deer.

I know you were thinking I was going to say firearms, but the reality is Bambi is much more dangerous to you. Nearly 1,000 people are hurt by deer vs car accidents on an annual basis and I don’t hear people getting all crazy about how we should control the deer population (which we should), rather how sweet and innocent they are and people should not hunt them. If NC is an average state then think how many accidents and deaths there are in the US. In 2000 there were 200 deaths from deer collisions and 1 million, yes MILLION, collisions Nationwide. As a Nation we really need to rethink what we worry about.

Stop focusing on gun control and think about the thing which really affects us most, Cancer. Find a cure for that because Cancer affects us all!

So I think anyone who reads the blog would know I’m a beer, wine, and Bourbon kinda guy. I don’t do too many mixed drinks other than the occasional Bloody Mary or something concocted with Bourbon. The other night while watching one of our favorite shows, The Booze Traveler, our hero was in Italy and was drinking Campari. I checked our bar and sure enough we were well stocked so I poured a little over ice which was what he appeared to be doing. I must say Jack Maxwell is the man if he could choke down large gulps of that. It is quite bitter and astringent with a definite citrusy orange pith/peel character. I don’t care for gin and I also don’t care for orange juice so I believe most cocktails with Campari are not going to appear in my playbook. Anyway, if you like bitter orange this might be your ticket, I can see dropping some in a nondescript wheat beer or a smidge in a cocktail to create a more interesting beverage, but as a sipper I’m going to pass. 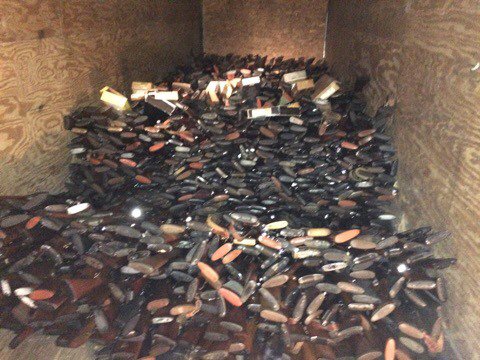 Happened upon Apothic Red at a wine bar and decided to bring a bottle home to enjoy. It wasn’t difficult to find at a local wine shop and the price was only $8. The wine is a blend of Zinfandel, Merlot, Syrah, and Cabernet Sauvignon and which creates flavors which pair well will food or even with just a glass. The website notes Vanilla, Black Cherry, and Mocha, but I got much more complexity from Oak, Berries, Chocolate, and a myriad of other flavors. The finish is just dry with a big body and IMO it creates a heck of a drinkable wine in a modest price point. If you are looking for an affordable and crowd pleasing red blend get a bottle of Apothic Red and thank me later. 😉

I received an email from a bottle shop announcing the arrival of Guinness Nitro IPA and must admit I was hoping for a very nice beer. What I got was something different altogether. The 5.8% ABV brew touts 44 IBU from Admiral, Celeia, Topaz, Challenger and Cascade. Then Challenger, Cascade and Topaz hops are dry-hopped to supposedly create a citrus aroma. What I found in my glass was bitter water. It was did not have enough malt backbone to create a nice English Bitter and wasn’t hoppy enough to have a nice IPA. Heck, it was barely a pale ale and I’ve tasted beginner homebrews with better balance. My suggestion is to skip it. If I see it on draft I might snag a pint for comparison, but what I got out of the can wasn’t worth my time to consume.

Suppose a delivery man was stealing firearms from packages what should be his bail? If you guessed $25,000 then you would be correct. Keeping in mind a bail bondsman will typically charge 10% it only cost him $2,500 to walk out of the courthouse. I’m not sure if anyone else has a problem with this, but I do. People scream gun control and yet when you have laws broken and criminals in custody you aren’t throwing the book at the criminal. Remember the last time we had a known trafficker who straw purchased 27 firearms and he did no jail time at all!

In case you are not familiar with the case of Eric Bruneau, he was a UPS employee and was acting suspicious on October 20 and when searched they found two firearms taped to his legs. He also had charges filed for two additional firearms stolen in June. Most likely this guy will get off with a light sentence and find a new job. What should happen is he should do some serious time followed by serious probation and learn the error of his ways.