Just a heads up I was able to locate some I.W. Harper at a SC liquor store, but it was the 82 proof standard version of the Bourbon. The 15-Year 86 proof has yet to surface. Early reports were the standard version would be around $30 and I guess $35 and change plus tax is around $30 of course using that math the 15-Year around $75 will be a Benjamin! I’ll place it in the queue so it may be awhile until I get around to posting some notes on it. I suspect by the time I do the market will be flooded and bottles will be easily located.

If more parents would discipline their children we’d have a lot less violence across the board in the US. I can see some parents out there saying don’t tell me what to do with my child and if that is your philosophy you need to make sure you take care of issues when they arise yourself. It starts very young. Last night a kid was screaming in the restaurant and the parents laughed as the baby dolphin screamed. I’m not suggesting the child should be beaten or harmed, but either soothed if the screaming was due to pain or fear, or taken from the area and not provoked further if that was the reason for the outbursts. The teenager in this video was heading down the wrong path and mom jerked a knot in him. It should happen more often!

I need another beer glass like I need another hole in the head, but one which has proven to be near impossible to find is a Fantôme Tulip glass. I remember once back in the day almost pulling the trigger on one shipped from Belgium, but it was ridiculously expensive with shipping so I held off. Fantôme was not being distributed in our market for several years and so it went out of sight, out of mind, but recently I’ve had the itch for a tulip from the brewery. If you happen to spot one for sale, please give me the heads up. I realize it is a long shot, but stranger things have happened. Thanks in advance!

Some time back I spotted Terrapin Hop Selection IPA in the bottle shop and needed to round out a purchase so I put it in my basket. Terrapin beers have always been solid and tasty so I figured it would not disappoint and boy was I right. The beer is a double IPA at 8.6% abv and the hops are Ella. I don’t honestly know anything about Ella hops, but I know the beer is fantastic. I found a description on Beer Street Journal:

Terrapin will be using Ella hops from the 2014 harvest. Ella (previously called Stella), the descendent of a Spalt-derived male and half-sister to Galaxy, is considered an aroma hop though with her higher alpha acid content of 14 – 16% she can also lend a hand in bittering. Ella has an interesting aroma of spicy hoppiness backed with softer floral notes and a touch of anise, which is a contrast to the big citrus/tropical fruit and pine notes of many modern hops used in American craft beers.

The label described them accurately as floral, subtle spice, and tropical. In case you haven’t picked up on it, this beer wasn’t just good, it was outstanding. The balance between malt and hop were spot on and the fruity and floral esters were divine. If you see this one out and about be sure to snag it, it is well worth your time and money. 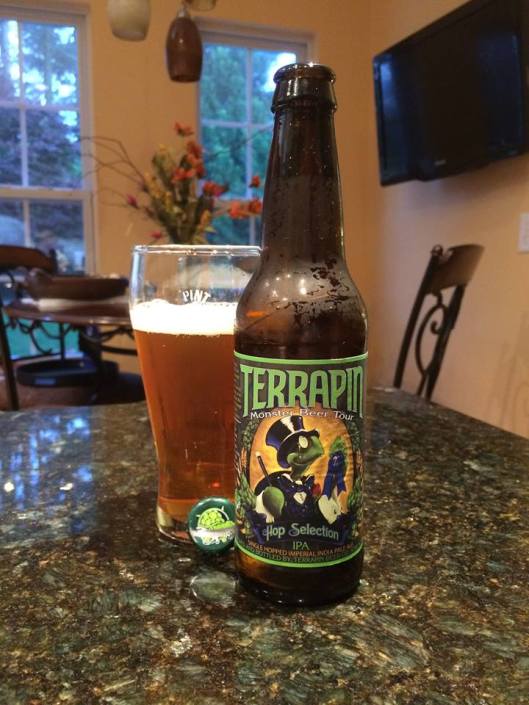 Our homebrew club recently held an Iron Brewer competition brew in and the secret ingredients were Peeps, Star Anise, and Jaggery. Brewers were required to use one package of Peeps per 5 gallons, a maximum amount of two Star Anise per 5 gallons, and up to two pounds of Jaggery per 5 gallons. Some mashed the Peeps and others put them in the boil, they held out for awhile, but eventually succumbed to the heat. Star Anise is quite strong in homebrew and the use varied wildly among the four teams. Jaggery is often palm sugar and some salt, but the packages called it cane sugar. The flavor was sweet honey and caramel with a hint of salt. If I was brewing I’d have aimed for a saison with a large amount of Jaggery in the boil, perhaps late in the boil. It will be interesting to see how the results turn out for the teams. 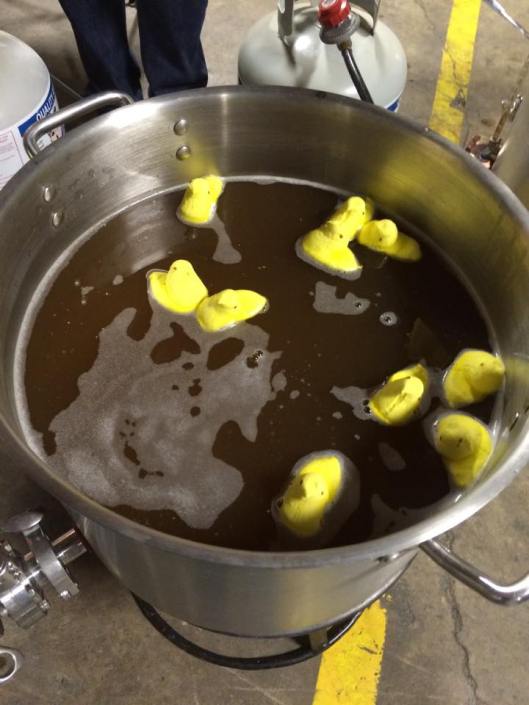 This week my local TV station teased coverage of a loophole in the law which would allow a quick and easy concealed handgun permit process to bypass NC requirements. What it turned out to ultimately be was nonresident permits from Virginia. This is not something new and certainly isn’t investigative reporting, or at least not difficult. Virginia takes a different stance on concealed permits believing their residents have that right and just need to display a minimal level of comprehension so they allow online courses to count for that training. These courses are as low as $20 and the person can get an out-of-state permit after filing the required paperwork and a $100 fee to Virginia. A background check is performed. The difference between a NC permit and a non-resident VA permit are the NC permit has classroom and range requirements and the NC permit allows you to skip getting a Pistol Purchase Permit or having a NICS background check. With a VA permit you still would need a PPP to get a pistol and have a NICS check for a long gun.

My personal opinion is NC residents should not be allowed to use nonresident permits in NC. Those permits are basically a means to skip the required classroom time and training of which the most important element is the law. I don’t know the laws everywhere, but I do believe the laws governing deadly force in NC is excellent background information the student can then take to understand the laws of states with reciprocity where they may travel. If they have not had that training and comprehension, then they may find themselves in trouble at some point in the future. The follow-up story from WRAL was the reaction from lawmakers and neither of the gentlemen were aware of the nonresident permits. I suppose it could be true most people are not aware of them, but it did not come as news to me.

Last night I opened Foothills April 2015 IPA of the Month. The dog this month is a rescue mutt named Finley. The beer was 6.6% abv and the hops were a blend of five different varieties. The flavor was big and bolt with bitterness trouncing most everything else and citrusy esters, pithy bittering, and orange ruling the day. At first it was a bit off-putting, but by the time the assault on my tastebuds calmed down it became a new favorite. The stated IBU level was 74 and it was every bit of that if not more. You should find this one and perhaps let it age just a tad to allow all that bitterness to calm down just a skinch. It was a tasty brew in April, but I suspect it will be just right by Fall. 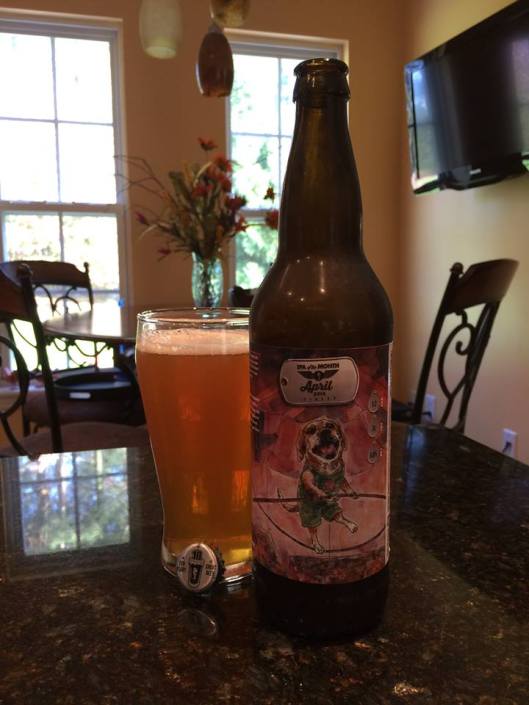 A website named ncbeerjobs.com appeared recently with what appeared to be a plea to residents of NC to defeat two bills in the NCGA and save NC Beer Jobs! The problem is the bills are relatively benign in nature. The text on the site talks about MillerCoors and these bills would not affect those employees or that business one iota. The other business mentioned was independent beer distributors and I believe that is who is really behind this website. I tried to figure it out from their logo and web registration, but no dice, so let’s check out the bills in question to figure out who is behind this farce.

H625 is also pretty simple, it allows contract brewing and selling those beers at the brewery. I really cannot see how this would hurt jobs. Brewing more beer generally equals more jobs, not less.

Plain and simple this is an effort by someone, probably distributors, to keep people out of their playground. They don’t want to see breweries self distribute and they don’t want to see sales at the brewery because then they don’t get their piece of the pie. The truth of the matter is the more breweries the more jobs because that beer still has to reach the consumer. It’s a bait and switch campaign. I’m not sure where the “petition” goes, but I’m pretty sure in coming days we’ll figure it out as these bills move through the NCGA.

The video below is of a brand new shotgun and what they found when they loaded the gun and chambered a round with the safety on.

Safeties are mechanical devices and they can fail. Always follow the rules for safe gun handling.

EDIT: The product has been recalled!

I happened upon a review posted yesterday on Guns.com by Eve Flanigan who is a concealed instructor out of New Mexico.  The article was titled, Polish Wanad P-64: Classic design for classic tastes, and that’s where I started to get a little let down. It is a Radom P64, or simply P64, not Wanad, a quick Google search would have yielded that information. I tried to find a reference to Wanad and all I came up with was Eve’s article. Later in the article the author discusses the double action trigger pull and how she could not accomplish it with one hand. I’m not dissing her for not being able to do it, but once again a few minutes on the web would have yielded the Wolff spring conversion. My other nit was the ammo, she mentioned it was 9×18 and even snapped a nice photo, but no mention of Makarov. Most people I know distinguish the round by calling it 9mm Makarov to avoid confusion. I often look to Guns.com for inspiration, but this time they let me down. Heck, they could have at least compared yesterday’s article to one they published in 2012.

Anyway if you need to know anything about the P64, just go here and thank me later.