Everyone knows I’m a Ruger fanboy, but recently they rolled out two new SR1911s and both have caught my eye. The first is the lightweight which is an 4.25″ 1911 with an aluminum frame and SS slide. I’m a sucker for a two-tone 1911.

Then a TALO exclusive popped into my Facebook feed and it is a Night Watchman in both 4.25″ and 5″. It has and oversize beaver tail and night sights and is a beauty with the black nitride frame and micarta grips.

Ruger has a habit of rolling out new products which I seem to like and desire. It’s why I hate them. 😉

I had an interesting post flow into my Facebook feed. It was for Bud Light Mixxtail. Apparently this is Bug Light infused with flavors to turn it into some kind of malt based cocktail. While I am sure it is not awful, it really doesn’t sound good either. Beer with flavors to turn it into Long Island Iced Tea and a cinnamon apple concoction named Firewalker? What are you thinking Bud? During the Superbowl you ran an ad bashing craft beer and saying your beer was “brewed the hard way” whatever the heck that means. Now you come out with this crap? Pass!

Of all things the hotel bar taught me something new recently. Asking for a Maker’s and ginger and expected ginger ale, but the barkeep pulled out a bottle and poured it making the cocktail. I was not expecting much when I saw what he did, but the results were quite tasty. Last night I happened to be back at the hotel and snapped a photo of the bottle as I ordered the same libation. It is Old Ballycastle Ginger and I need to snag some for the home bar. Much easier to keep around that a fridge full of ginger ale. Note to self, find this!

I must admit I rarely grab my Reissdorf Kölsch Stange as my glass of choice when having a beer. The small, 0.2L, straight sided glass just doesn’t scream drink from me when staring back out of the bar. The other night I had a quart bottle of Lagunitas Sucks staring me in the face and decided it was time to grab the Stange and give it a whirl with something other than a Kölsch. I believe it was ultimately the right decision. The small diameter places your nose in the glass and brought forth all the hop characteristics and esters in fine fashion. Since aroma is a large part of smell the hops seemed just a bit more bitter in the flavor. There have been some studies on glass shapes and flavor and it does affect the perception provided you can smell in the first place. The pint glass we so often see in the US really doesn’t do much for the aroma of brews, so you are bound to have something in your collection which will do a much better job. So the next time you grab a favorite beer, try out a new glass and see how it changes your impression of the beer.

I often find myself alone in a restaurant and typically the place I choose to dine will either have a great beer selection, a great Bourbon selection, or both. Since the only real way to know what is on tap is to view the handles and often there is no complete Bourbon list even at the best establishments I find sitting at the bar will allows the easiest method to peruse the taps or bottles to make a libation decision. If you do sit at the bar please be aware of the patrons next to you. Last night a couple who were outside smoking a bone came in and plopped down next to me. Despite no smoking inside the restaurant, these two had enough second-hand smoke on their clothes to negate that policy. Also the guy was obnoxious and not in a funny or good way. It’s fine to laugh and carry on with friends, but when he started just singing a song to no one you realize this joker is a few fries short of a happy meal. As they sat and I smelled the smoke I decided to shift down a few seats which was an excellent decision.

The gentleman next to my new seat turned out to be 79 and a beer lover. He recalled various beers which had come and gone and is now a lover of craft beer. I have to admit my plan last night was to have a drink and a meal and leave and I ended up getting so much more. He had retired in 1991 from a large corporation and started his own business in the area which was flourishing. We discussed his expansion plans and I think I even added some food for thought with the design he had overlooked. Later a new brewery owner came around pouring samples. We spoke with him quite a while. It was a very enjoyable evening and had I not sat at the bar I’d have missed the conversation.

I suggest if you find yourself out alone you find a seat at the bar away from the irritating people and near someone who looks like they may be game to strike up a conversation. You never know just how enjoyable dining alone can be until you find you were never alone in the first place.

No doubt you are aware of the three students murdered in Chapel Hill, NC over a parking space dispute. Yesterday the News & Observer decided to publish an editorial by Ned Barrnett entitled The Hard Toll Of Easy Guns in which Ned spells out his thoughts and his ignorance at the same time. As always the rhetoric appears to be benign and to have the sheep shaking their head yes, but when you look at the facts the argument just doesn’t hold water. Ned first speaks of a hate crime and hatred of Muslims by the murderer and in reality this guy hated anyone who parked in his parking space. The paper just did a long write-up about it, you would think Ned would read and comprehend his own paper. I’m not saying it wasn’t hatred, he killed three people after all, I am saying it wasn’t the normal definition associated with a hate crime. Anyway, the full story should come out in full at the trial if the prosecutor and defense attorney take the time to investigate the crime properly. It won’t bring back those three young people and won’t change the fact the murderer deserves the death penalty for his actions.

Ned continues his editorial speaking about hate crimes and then tries to connect this incident to Newtown, CT through one of the firearms found in the apartment of the murderer. He then tries to persuade you it might have been used in the murders and to murder others. Ned just doesn’t have any facts to support any of that supposition. Finally he gets to his point, but it really isn’t what he wants. You see Ned wants no one but the government to have guns. Ned is afraid of guns and he believes they are evil, but he doesn’t have the balls to come out and say it. however, I do have the balls to call him out on it. Ned calls for sane gun laws and says, “People should be allowed to have guns only when they can establish a need for them – hunting or protection – not just a desire for them.” So Ned would restrict your right to pick out whatever firearm you wanted. You would only be allowed to own a firearm for hunting or for personal protection, and only if you demonstrate a need. I wonder if Nate feels everything in life should be regulated. One pair of shoes unless you can demonstrate a need. Only one car unless you can demonstrate a need. I don’t see how limiting choice would have stopped this crime. I actually don’t know what type of firearm was used in killing the students in Chapel Hill, but I assume from what I have read it was a handgun. What Ned fails to take into account is a hunting rifle would have still been available for this murderer and he could have always obtained firearms through illegal means if restrictions were in place.

So thanks Ned for letting us know where you stand and what to expect from the editorial page of the N&O, even if I did have to read between the lines to see what you really want is restriction and confiscation of firearms from law-abiding citizens. Perhaps your masthead on the editorial page should state your true philosophy, The masses must always suffer due to the actions of a few.

The local homebrew club competition is Saturday March 7 in Raleigh, NC and they can use additional experienced judges. If the date will work in your calendar and you are an experienced judge and can help out, please sign up.

I finally opened a bottle of Gale’s Conquest Ale Masterbrew 2001 recently and I wish I had used it to clear the drain instead. Ultimately that is what I did. The beer could not have ever been stellar and somewhere in the back of my mind I knew that was going to be the case. It was a tiny 9.3 ounce corked bottle which was sealed with a plastic closure. It poured flat and I doubt it was ever carbonated to any degree. It did have a nice backbone of caramel, but everything else was a mess. Luckily it was not sour although that may have masked the oxidation. An odd note was the roast in the finish. I would suggest if you happen to have this in your stash you go ahead and open the 9% ABV beer, and if some store is unlucky enough to still have a dusty bottle lingering on the shelves you pass it by. This one is a loser which probably explains why it is no longer produced! 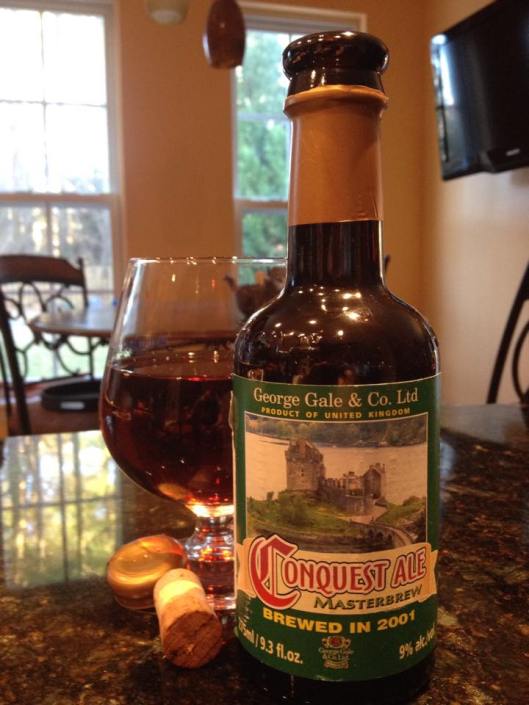 The ATF pulled it off already, they have virtually eliminated the M855 Green Tip ammo by suggesting it would be banned from import and manufacture. Immediately the shelves are bare. I could have sworn back in the day I paid 35 cents a round or less for it and today when you can find it is nearing 50 cents and potentially more. A few places have it, one is 45 cents per round plus shipping for 1,200 rounds, but not long ago it was 36 cents per round plus shipping for 510 rounds and included an ammo can. A dime per round might not sound like much, but it is $3 per magazine and some training classes might require 10 magazines. I know I much prefer having $30 in my pocket as opposed to having to pay it out just because there is a rush on the ammo supply. I expect the end of the Green Tip is near. It won’t be illegal to own and shoot, but it will no longer be imported or sold if the ATF has their way. A shame to let them rule in such a manner and even a bigger shame when hoarding eliminates supply. With that in mind, if you want some, you better get it now before it is gone.

Just thought you should know!

Go get some limes immediately!